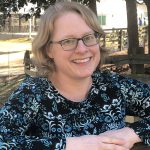 The directors of the Dunwoody Preservation Trust (DPT) have appointed Dunwoody native Noelle Ross as its new executive director.

Ross brings to DPT a range of talents the board believes to be suited to leading a growing local non-profit. A graduate of the Marist School, she holds a B.A. in music from Oberlin College and is both a composer and classical singer who performs with the Atlanta Symphony Orchestra Chorus. She also holds an M.A. in music education from the University of London Institute of Education.

For the past 16 years, she has held leadership and human resources management positions in which she worked with both adults and children as a trainer, a teacher and a director of children’s choral groups. Besides music, she considers her main talent to be team building.

“DPT has a small paid staff and relies heavily on volunteers,” said David Long, DPT board president. “We’re growing and changing fast and felt that Noelle’s experience as a team builder in a variety of environments made her a great fit for this newly expanded position.”

Ross reports to the board. In addition to managing the staff and leading the volunteers, she is tasked with executing the board’s vision, which includes expanding its services, growing its membership and building its donor and sponsor base.

As a Dunwoody native, Ross is very familiar with DPT’s activities, especially Lemonade Days, its largest fundraiser and a Dunwoody signature event held annually in April.

“My two daughters, ages 8 and 10, are excited by the prospect of attending all five days of Lemonade Days this year,” she said, “and I’m looking forward to helping move DPT into its newest phase and spread its recognition throughout the community.”

Ross invites anyone interested in joining, sponsoring or volunteering with DPT to contact her at the DPT office at (770) 668-0401 or noelle@dunwoodypt.org. 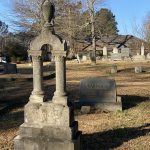 Join us on Saturday, March 19 from 9:30am-12:30pm for a volunteer clean up day of New Hope Cemetery. New Hope was established in 1859 and is the resting place of the founding families of Dunwoody.

Families are welcomed to participate (children ages 8-14 accompanied by an adult). Work will include general clean up such as raking, pruning, debris removal, etc. Work gloves are recommended, rakes and pruning shears are needed, and water will be provided. If bringing children, please list the ages in the “My Comment” area of the Sign Up Genius.

New Hope Cemetery is located behind the KinderCare at 5695 Chamblee Dunwoody Road. 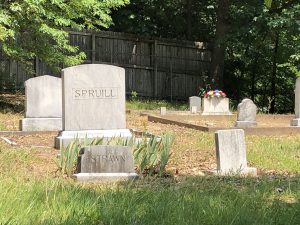 Join us on Saturday, October 16th at 4pm for a tour of the Stephen Martin Cemetery. Hear stories of the Dunwoody families that are buried there and their experiences. This is a family friendly event so bring the kids. This is a free event and no reservations are required.

The Stephen Martin Cemetery is located at 244 Perimeter Center Parkway, NE, Dunwoody, GA 30346 and is accessible from a marked gravel driveway on Perimeter Parkway. Please park in the back of the parking lot to the right of Marshalls/Nordstrom Rack and meet us at the cemetery marker there for the short walk to the cemetery. 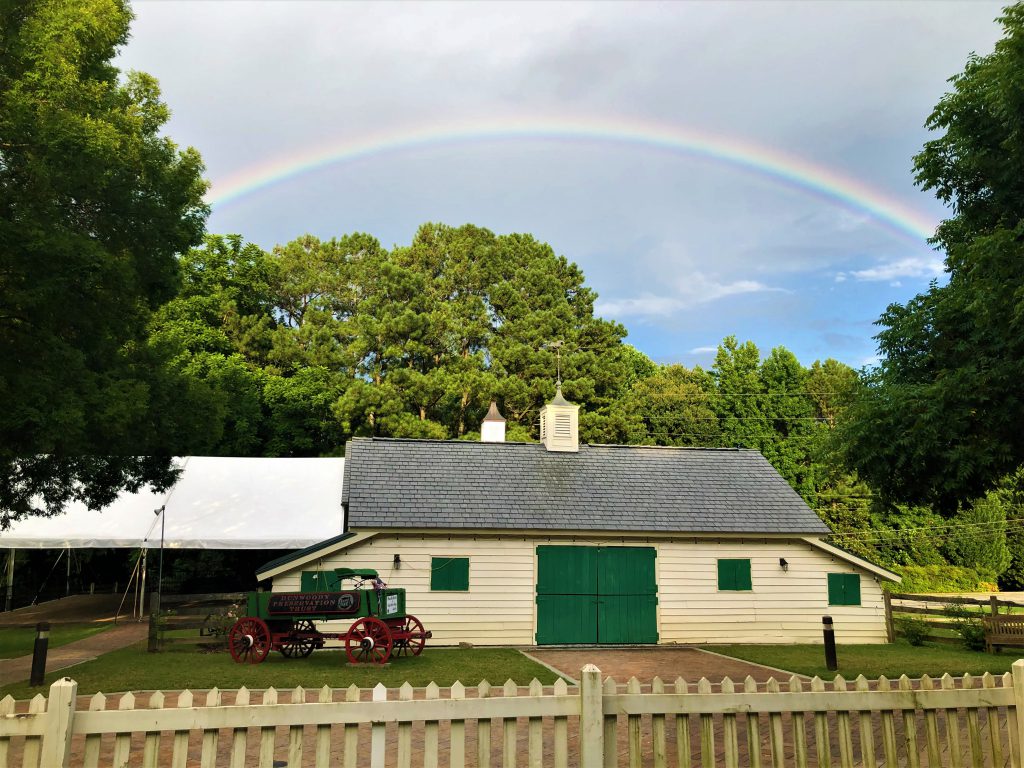 We love these views at the Donaldson-Bannister Farm following summer showers!

Thank you to all our volunteers that helped and participated with our float at the Dunwoody July 4th Parade. We had a fabulous time! 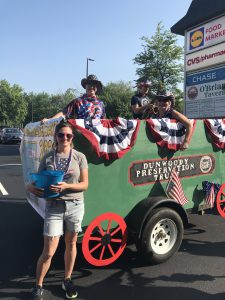 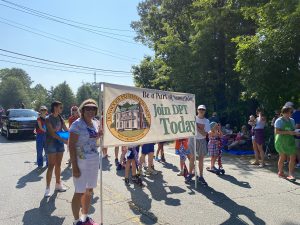 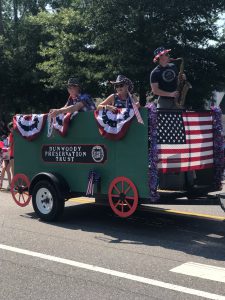 Open House at the Dunwoody Farmhouse Thank you for joining us at the Open House at the Cheek-Spruill Farmhouse on Thursday, June 17th.  We love showing off this iconic and historic Dunwoody home! 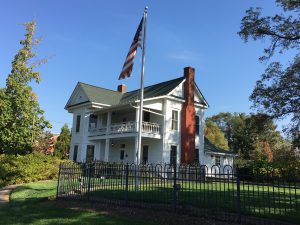 Have you seen the latest Dunwoody Guidebook? Be sure to read their article about how Dunwoody has worked to preserve it’s past.  Click here to read the article. 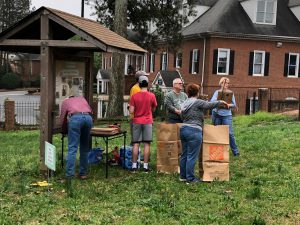 Thank you to all our Volunteers that came out for Clean Up Day at New Hope Cemetery. This Historic Cemetery is the resting place of many founding families of Dunwoody. The site looks much improved and we sincerely appreciate our community’s response.

Kathy Florence served as Co-President of DPT with her husband Tom from 2009-2011.  She had been actively involved with DPT prior that time and continues to this day.  She help organize our involvement with the 20th Anniversary of the Dunwoody Tornado, helped write our Long-Term Plan and developed ads and marketing materials for us for years.  She is also quick to volunteer with helping at events such as our Farm to Table Dinner.

Sara Massey has been an active volunteer for DPT for 15+ years.  She recently wrapped up her term as Vice President of Events/Community Outreach on our Board.  For years, she has been in charge of DPT’s entry in Dunwoody’s 4th of July Parade and donates hundreds of cookies that are decorated at Light Up Dunwoody.  Sara also organizes the volunteer decorating (and un-decorating) seasonal decorations at both the Cheek-Spruill Farmhouse and the Donaldson-Bannister Farm. 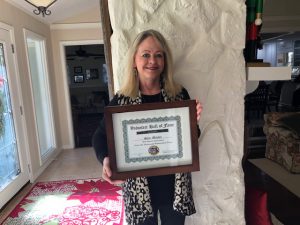 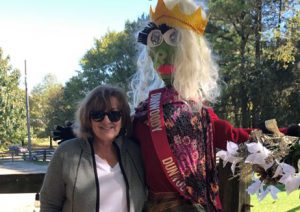 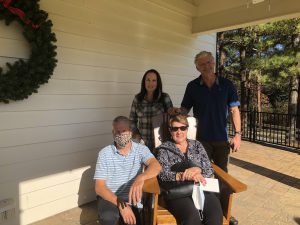 DPT would like to thank the friends and neighbors of Dr. James (Jim) Awbrey III for the gift of the two wooden rocking chairs given in his memory.  Dr. Awbrey, a long-time Dunwoody resident, opened his dental office in Dunwoody in 1972 and practiced here for 34 years.  He was known as “Dr. Donald Duck” for his ability to speak like Donald Duck.  Dr. Awbrey and his wife, Dunja, raised their three children in Dunwoody. He passed away this past summer after a long battle with Blood Cancer and Parkinson’s.

One of Dr. Awbrey’s passions was woodworking and building furniture. He was a MASTER woodworker, and it was for this passion that his friends and neighbors wanted him to be remembered in some way at the Donaldson-Bannister Farm across the street from his home.

A dedication ceremony was held at the farm Sunday, December 13th and attended by Dr. Awbrey’s family and friends.  The chairs are located on the porch of “new” barn overlooking the pasture and welcome all to come “sit a spell” and enjoy the park.

Dunwoody Preservation Trust historians, Valerie Biggerstaff and Lynn Tinley, PhD, were guest speakers at a DeKalb History Center lunch & learn on November 17, 2020, in which they discussed the long history of the Donaldson-Bannister Farm, built in 1870 by William James Donaldson and his wife, Millie Adams, who was a descendant of the family who acquired the property in the 1821 Land Lottery. View the recorded presentation here.

Thank you to ALL who gave to our campaign! 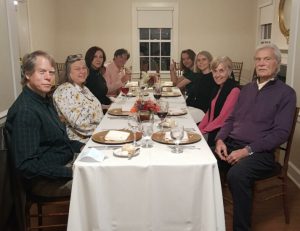 Dunwoody Preservation Trust is so appreciative of everyone that gave donations to our campaign earlier this year to help replace lost funds for not being able to host our primary fundraiser, Lemonade Days.  We did have a winner of our drawing for a catered evening at the farm – Maggie Staats!  We hosted their dinner this past weekend at the Donaldson-Bannister Farm and it was a celebration with family and friends for Henry Staats birthday.  It was a lovely evening of fine food, wine and music.

First Friday at the Farm each month on Facebook Live! 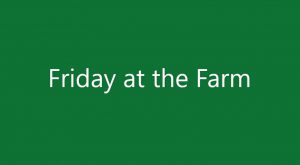 Join us the First Friday of each month at 12Noon on DPT’s Facebook page for our First Friday at the Farm Live Video. Learn about the history of the Donaldson-Bannister Farm, what events are going on and more!  https://www.facebook.com/DunwoodyPreservationTrust

(And all past videos can be viewed on our YouTube channel as well at https://www.youtube.com/user/DunwoodyPT/) 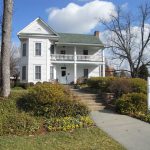 Looking to get out of the house and want to learn some of Dunwoody’s History?  Take a look at our new driving tour on the PocketSights app for your smartphone.  This is a free app and you can find numerous walking and driving tours around the country.  We are the only tour in Dunwoody.  The tour starts and ends at the Cheek-Spruill House and will take you on a 20-mile round trip tour to view 17 historic locations in the City of Dunwoody.  Along the way you can view past photos and read about the history of these sites. Check us out!