William James Donaldson – “WJ” – the patriarch and his family in 1895

The circa 1870 Donaldson-Bannister Farm is special to longtime Dunwoody residents, who think of the charming two-story farmhouse as a reminder of bygone days and remember when there were still animals in the pastures surrounding the home. It is also special to today’s residents because it is now a beautifully landscaped public park for the enjoyment of all who love history, the grounds available as a site for community events and the house available for special events such as weddings, birthdays, anniversaries and corporate meetings.

WJ, the patriarch who built the farm with his own two hands.

At the end of the Civil War, William James Donaldson, known to his family as WJ, returned to the area after his service to the Confederacy. Little did he know the legacy he would leave behind.

Born in South Carolina in 1827, he had come to Georgia as a child. In 1850, he was living in Cross Keys, today known as Brookhaven. There, in 1851, he married his cousin Nettie (also called Nutty) Lucretia Reeves (also spelled Reeve) and continued living for a while in Cross Keys. By 1859, the year Nettie died, he was living in Calhoun, Georgia, with her and their two surviving children.

In 1861, a widower with two young daughters, he returned to Cross Keys and married Sarah Powers. The war began and he joined Company F, 36th Georgia Infantry Regiment on April 10, 1862. He was captured at Vicksburg in July of 1863, surrendered on July 4 by signing an oath not to take up arms again and was released soon afterward.

WJ kept his oath and did not take up arms again for the Confederacy, though he continued to serve by making and repairing shoes at the old Atlanta Depot until 1864, the year of the burning and fall of Atlanta.

Following the war, he relocated to the area just north of Cross Keys identified on maps as Providence for the church that stood along present Chamblee Dunwoody Road just north of Mount Vernon Road. We know this area as Dunwoody.

In 1868, he was married for the third and last time, this time to Martha (Millie) Adams (born 1842) and lived on the land once owned by her father, Jesse Adams, a son of Salathiel Adams, a pioneer who lived in Cross Keys and is buried in a small family cemetery off Oconee Pass. Over a period of several years, WJ with help from family and friends built a Plantation Plain-style home on the property. This is the home that still stands on the property.

According to the 1890 Georgia census, Millie and WJ had acquired 321 acres between Dunwoody and Chamblee, though family lore has it that he claimed to have a thousand acres. After WJ’s death in 1900, Millie Adams Donaldson, a widow and true steel magnolia, continued to run the farm for the next 30 years.

The end of an era.

Millie passed in 1930. In the depth of the Great Depression, her family was not able to maintain the large property. In 1934, it was divided and sold at auction, at which time the rest of the Donaldson family built and moved to a smaller house further down on what is now Vermack Road.

At auction, another widow, Lois Pattillo, purchased 26 acres that included the old farmhouse and family cemetery. Intending to use it as a summer home, she hired Atlanta architect Francis Palmer Smith to remodel it in the Colonial Revival style.

After purchasing the farm, Lois married Leland Bannister, who lived nearby on Chamblee Dunwoody Road, and became known as Lois Bannister. A few older people still alive remember her trotting her Saddlebreds up and down the dirt road along the side of the property, now known as Vermack Road.

In 1942, Lois sold the property to Charles Roberts. His wife, Flossie, and their two daughters, Peggy Jean and Charlotte, lived here during the war years.  The farm was sold in 1946 to the Henry Ogden family, who lived there for 10 years. In 1955, Frank Smith, a successful Atlanta nursery owner, bought the property and lived there with his family until 1973, when Developer Jim Cowart purchased it while planning the development of an adjoining neighborhood.

The last family to live on the farm.

Though a builder of new homes, Cowart actively sought to find a buyer who would restore the now-historic home and live there. In 1975, he found that buyer in Linda and David Chesnut, who restored and lovingly maintained the property. In 1998, when a tornado struck Dunwoody and severely damaged the house, primarily due to large mature trees falling on the home, the Chesnuts repaired all the damages and restored the home to its glory.

And the farm survived.

The Chesnuts sold the property to DeKalb County in 2005 with hopes that the county would care for the old house. Instead, it sat neglected for years. When Dunwoody became a city in 2008, the home and surrounding property became part of Dunwoody’s Parks and Recreation Department. As the home continued to sit unused and without needed repairs, the Dunwoody Preservation Trust stepped in, offering to manage the renovation and operation of the historic home. 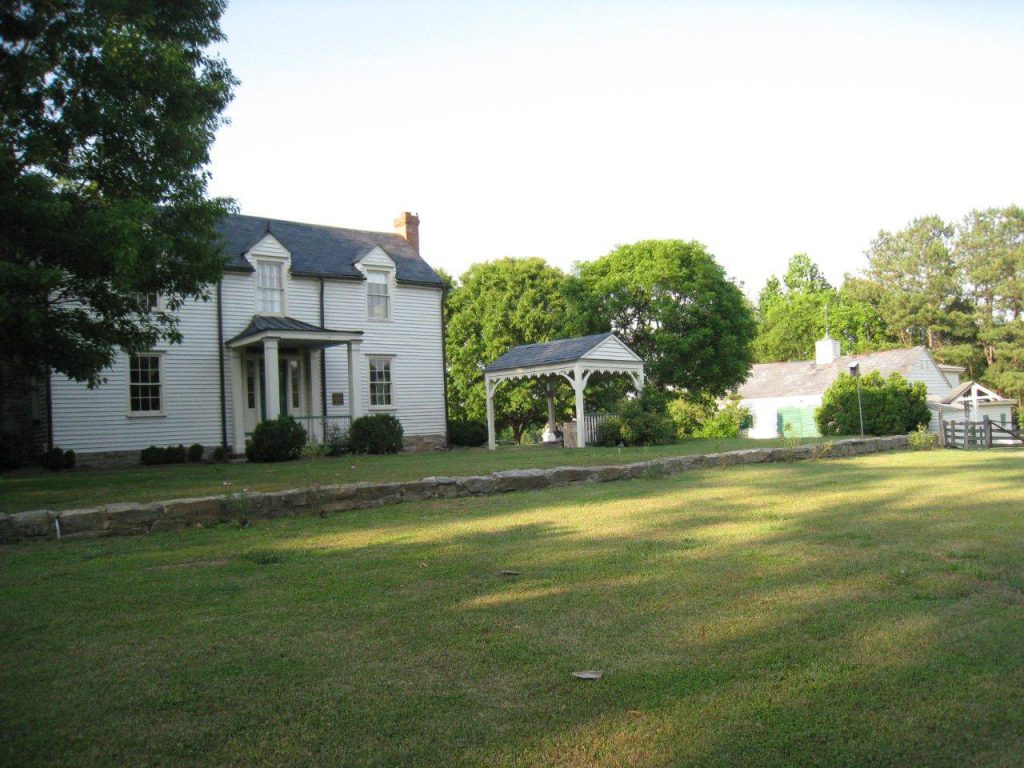 On May 1, 2018, after many years of fundraising and hard work by many people, the community gathered to celebrate a Grand Opening and Ribbon-Cutting as the old home, beloved by so many through so many years, was brought to life again as the Donaldson-Bannister Farm. The farmhouse and grounds, perhaps more beautiful than ever, are now open to the next generation to write a chapter in the history of the Donaldson-Bannister Farm.

Want more history about the farm? Watch this video presentation to the DeKalb History Center by two of our historians, Valerie Biggerstaff and Lynn Tinley. Click here to view the recorded presentation.

Are you interested in hosting your next event at this property?